“The mean voice says, "You're just a little upstart, just a creature, and you had better learn your place.” But it's lying. Because, on the contrary, you are IT."  --Alan Watts

"Words are of the mind and the mind obscures and distorts. Hence the absolute need to go beyond words." --Nisargadatta


Recently I worked with a new client, and after the session found myself thinking, “That was terrible. They didn’t understand, they didn’t like it, they won’t be back. You’re a failure.”

Within half an hour, they wrote eager for a chance to meet again tomorrow.

You gotta love the mind’s inner voice. So sage. So knowledgeable.

I mean, a lot has been written elsewhere about this inner voice and what it supposedly is.

Yet we can see there’s nothing provably there. Nothing with an actual voicebox, nothing which shows up on an MRI, nothing anyone but ourselves can hear.

So herewith we shall call this inner voice, “Harvey,” the invisible, 6-foot movie-rabbit.**

It’s amazing we listen to it at all, considering how mean it is.

Perhaps that’s partly because, right or wrong, it brings receipts. Selectively leaving out any evidence which doesn’t support its theories, it says, “See? Remember when you did this, remember when you said that? See? See how they hated you? That was your doing, your fault. Because you’re Cah-RA-ZEEEE.”

Most folks don’t notice that the inner Harvey (if there is an outer Harvey please contact your doctor. That’s just taking this imaginary friend business too far) always summarizes up its bullying commentary with a definition

of who we are.

The “me’ is labeled and defined. Through Harvey.

This is exactly what that voice is for- to evaluate us and identify us as separate, unique individuals. It makes us feel real.

It doesn’t make us actually real. Just makes us feel like it.

Because of course, no not-really-there-voice can make any person actually exist.

Meanwhile, have we not noticed that this voice says the exact same things, with the exact same words, to millions, maybe even billions, of others? “You made a mistake. You should know better. You are damaged, broken, crazy. You are a bad person.”

How can a voice which says the same stuff to everyone prove our own individual existence?

If those definitions of us aren’t even about us in particular, then none of the name-calling is personal.

Which means it doesn't know us. It only knows its script.

Despite calling us names, the voice has no idea who we are.

It gets weirder though. Because defining-us Harvey is somehow also supposed to be us. It's us, supposedly talking to ourselves.

Sure, sure, that makes sense, to be both speaker and listener, talking to our self nonstop.

And then also, that voice belongs to us. As in, This is my inner voice. MINE.

Though why we would want to own a pet bully, I have no idea.

So it seems we believe we are simultaneously 1) the voice, 2) the creator of the voice, 3) the thing the voice is talking about, and 4) its owner.

Which makes about as much sense as a 6-foot rabbit.

Of course there’s not much we can do about this. Harvey has been talking and defining humans for thousands of years. He’s not about to shut up now.

So maybe instead we could consider…  If we’re not whatever that bodiless voice says we are, and if we’re not Harvey, and if we're not the owner of Harvey,

Who are we? What are we?

Without that voice defining and insisting,

We are dependent on Harvey to know our selves.

Something is aware of it.

And whatever that is, if we just feel into it without thinking too much- is that hearer broken, flawed, crazy?

If we had to choose, which is closer to what we really are- Harvey or the hearer (if either)?

Maybe we can play with trusting that.

Without even having to know what it is.

Anymore than we currently know what the inner voice actually is.

And paying some attention to what hears rather than what speaks,

than lugging around and feeding some mean, bullying

“There is a voice that doesn’t use words. Listen.”
--Rumi 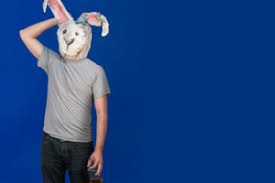