Categories: spiritual seeking path get there what is enlightenment

"Unless you make tremendous efforts, you will not be convinced that effort will take you nowhere."
--Nisargadatta

"The search for the unknown is absurd. How can I search for what I do not know? Whatever I seek, is a thing which I have already known or experienced. So seeking is running away from the actual, real life. This is the real life. THAT is the unreal."
--UG Krishnamurti (slightly edited)

"“Reality and completeness are in plain sight. Absolute completeness surrounds you wherever you go. We humans have long ago deceived ourselves into such a confined tangle of confusion and disarray that we scarcely even consider, much less experience for ourselves, the divinity within and all around us.”
--Adyashanti

"The Truth is only Here and Now,
but the search says it is tomorrow."
--Papaji


The lovely young woman is pretty sure she had an enlightenment experience, evidenced by feeling some peace and contentment for a while. Then that went away. She wants more.

The man is all over social media asking people how to get enlightened. He receives answers, and then argues with those answers. He remains in search of his permanent bliss.

The depressed man back-burners his sadness, preferring to urgently look for the face of God in his mirror.

It's not news that people are obsessed with attaining the enlightenment dream.

The life that's here feels not right. Enlightenment is expected to fix that.

Though the God-face already in the mirror is the same face which allows all the current non-blissful suffering, fear, and not-ok-ness to exist in the first place.

It seems when folks expect rightness to look identical to their preferences, they may not notice that God is already in the mirror.

Plus, when only bliss will do, that God/ consciousness starts to look mistake-prone. It hasn't gotten things correct yet, and keeps coming up with more suffering.

So maybe that divinity isn't even worth chasing for a whole lifetime...

given how much of what it produces is not even wanted.

So, perhaps most seekers actually have no interest in finding God/ existence/ consciousness, awareness, as it is.

I mean, they do continue to hunt until they get their bliss. Maybe that's all they want.

To hell with the vast amount of non-bliss.

Although, the search for bliss starts to sound a whole lot like traditional religious ideas of heaven, only transferred to different words and contexts.

Do everything right- pray or meditate or inquire or follow the right guru or find the path- and voila!

What has to happen to the earthly human self, in order for it to get into heaven?

It has to die first.

Are all those seekers in such a hurry to obliterate the self? Are they such eager fans of Nothing?

Because that's what's left once the self is seen through.

Not the grand satisfaction of having all the happiness and lack of pain the ego can possibly crave.  Not the making of a better, happier, experience, for a personality.

Turns out no one can get the dissolving individuality they supposedly want, while also keeping the individual sense of self intact, distinct, and separate.

Bliss is for the person.

And Heaven requires the non-person.

As in, absorbed into the vast collective nothingness, non-self.

And aw hell, not even guaranteed the bliss.

Good lord, no thanks.

Of course most spiritual seekers have no interest in that kind of loss. They want the custom-made, tailored to the likings of their individual self, all-pervasive gain.

Even though enlightenment is not in the business of acquiring
the perfect, hoped-for dream life.

Instead, it does the opposite- it takes away the dream.

Still though, it remains clear and perhaps unavoidable, that seekers gotta seek, anyway.

And who is anyone to keep them from that?

Luckily, existence /God/ consciousness does not owe any person any particular kind of experience.

So it includes the yearning, the dissatisfaction, the misery and empty incompleteness, of seeking.

And then who knows, maybe after the efforting time has been put in, and the individual seeker is finally t. i. r. e. d…

maybe the desire for attainment will make sense to revisit.

What Is will still be What Is, even after the rainbow is chased to exhaustion.

Long after any one seeker discovers

that there is no horizon to reach

and that there is no self to reach it,


"At its core, self is nothing but a contraction of emptiness. Ultimately, we transcend this primal gut level self-contraction by being willing to allow the separate-self sense to die. This is what it means to die before you die so that you can truly live.
…Nothing will have changed, except everything. And you will then simply go on about your life."
--Adyashanti

"I meet a lot of people who think they are enlightened and awake simply because they had a moving spiritual experience. They wear their enlightenment on their sleeve like a badge of honor. But if you feel special in any way, then enlightenment has not occurred. 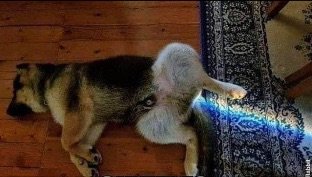