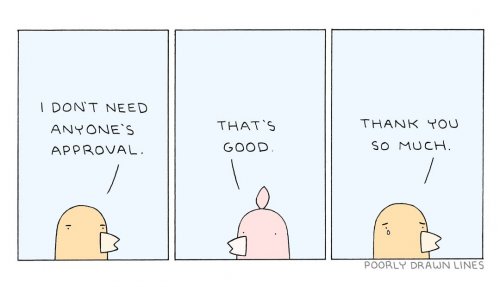 "As a very young child I didn’t recognize myself in the glass, and neither do I now, when for a moment I regain my lost innocence. In my saner moments I see the man over there, the too-familiar fellow who lives in that other bathroom behind the looking-glass and seemingly spends all his time staring into this bathroom - that small, dull, circumscribed, particularized, aging, and oh-so-vulnerable gazer - as the opposite in every way of my real Self here. I have never been anything but this ageless, measureless, lucid and altogether immaculate Void: it is unthinkable that I could ever have confused that staring wraith over there with what I plainly perceive myself to be here and now and always!”
― Douglas E. Harding


Do you brush your hair?

How about putting on pants in summertime?

How about folding the laundry, checking social media to see if people like your posts, answering, “How are you?” with “Good,” even when you’re not, checking your scores in a golf or tennis or dance competition?

What’s any of that for?

It’s not for you, that’s for sure. If you were the last human on earth, it’s unlikely you would care if your underwear was folded.

Pssst- you care what others think.

Now I realize some of you reading this will say, “Nuh unh, not me.” I realize it’s not cool to admit to caring about this.

And hey, I’m willing to pretend to believe you.

But truth is, you’re not cool. You do care.*

As does everyone on this planet, no matter how meditated, enlightened, therapized, or inquiried.

Because humans have to wonder about, play to, and check, what other people think about us.

It’s a requirement, not an option.

Maybe not in all circumstances, not about everything, but at least in some.

Maybe you don't care about your hair color and looks, but still try to impress friends with your wild and free lack of caring about hair color and looks. Maybe you're nice when you don’t want to be, or show off all your great nondual understandings to others, or feel embarrassed when you trip on the stairs.

Everyone wants to be seen a certain way, and to control what is seen.

There are no exceptions.

It might get a little less intense as the body gets older. But concern for controlling and impacting what others think you never goes away completely.

Why? Because on your own it’s not possible to see your actual self.

You can't see your self.

It's the only way you can know who you are.

It's the only way you can know if you are.

You are dependent on something which is not you, in order to look back and see you.

So sure you'll point to a photo or mirror and say, “That’s me.”

But photos and thoughts are not a person- they don’t eat, sleep, poop.

And you can't be both an image in that mirror and also whatever it’s reflecting. There’s only one of you.

So those images can't be the self either.

Though they are all you have.

Which perhaps explains why your eyes stay locked on your own face during a Zoom call.

And why it matters that other people think only the right things about you.

Urgently trying to get others to reflect back the liked, carefully curated, image of self you’ve spent lifetimes building.

Using other peoples’ thoughts as a mirror.

In order to see your self.

In order to reassure that you exist.

Now I realize this may sound like woo woo hyperbole, even if I mean it quite literally.

And of course there’s no reason you have see any of it my way.

Just point to the real you, something which is not a reflection or image or someone else’s thought.

Show me that real thing. Where is it?

Are you pointing vaguely at a body or head? Skin, bones, blood? Which of those is an actual person?

And what animates that collection of body parts? Whatever it is, isn’t that more you than a forehead or collar bone? So where is that then?

And what makes it distinctly you? What is it that provides it with personality?

Perhaps it begins to be clear how dependent your existence is on others' thoughts about you.

Because only something not-you can provide reassurance of the existence of I'm right here you.

So to some degree you’re always going to care what people think.

That’s just how it is.

Does this need to change?

Fold your underwear or don't, wear wrinkled clothes or don't, get an impressive job or don't, try for approval or don't.

And who knows? There may be a surprising freedom in acknowledging that dependence on reflection and so-called other peoples’ so-called thoughts, is the only thing that proves us.

There may be a surprising freedom in seeing that no image, thought, or persona can make nothing into something.

Noticing how you try to control other people’s thoughts could turn out to be a great doorway into discovering what’s real and what isn’t.

Which may make that mirrored reflection you're so used to,

reflect back something very different,

TO something very different.


"It took me no time at all to notice that this nothing, this hole where a head should have been, was no ordinary vacancy, no mere nothing. On the contrary, it was very much occupied. It was a vast emptiness vastly filled, a nothing that found room for everything—room for grass, trees, shadowy distant hills, and far above them snowpeaks like a row of angular clouds riding the blue sky. I had lost a head and gained a world.”
― Douglas Harding

"Without you, I am nothing at all."
--Michael Markham