“The person you are right now is as transient, as fleeting and as temporary as all the people you've ever been." --Dan Gilbert

This is a rant. There's cursing involved. If this offends, save yourself and read no further.

My new client calls me ‘crude’ and quits his sessions, so offended is he by my free and plentiful cursing.

Other clients fume because I rudely interrupt the mind’s wallowing, when they want me to “validate” and let it prattle on indefinitely.

For sure, I regularly fail at people’s desire for me to be a sweet and gentle spiritual Buddha-lady at all times.

Naturally my sailor’s language, sarcastic humor and interruptions of whiny self-stories are regularly trotted out as evidence of how unawake I must be.

I do not at all resemble what enlightenment is supposed to look like.

I should git to fixin’ that right away.

Perhaps you’ve noticed that in spiritual circles, there’s zero room for any egoic quirk, any rough edge, any anger or fly-uncontrolled-out-of-the-mouth peculiarity.

Only surrendered, accepting, love-is-all-there-is bull is welcome here in enlightenment-land.

Which is a sad limited rule-bound life, if you ask me. But hey, I’m sarcastic and impatient so what do I know.

Nevermind that no one, ever, has actually met those wishful-thinking spiritual requirements for life to be only love and it’s-all-good at all times.

I mean, even the sainted Ramana got angry. Guess he had more shadow work to do.

Which is perhaps why my attention was drawn last week to an intense social media “discussion” between some esteemed spiritual teachers. Someone got called a cunt. Someone called another a dick. A popular, well-reputed awake person said, “Fuck off, asshole.”

Tsk. So unevolved! So unloving and unenlightened!

Naturally these name-calling, riled-up spiritual leaders felt bad afterwards. This is not how enlightenment is supposed to be presented. What about the image? What about others’ opinions? What does this unloving wrongness mean about their awake selves?

Don’t worry, they’re still enlightened. They made it clear afterwards that they still love each other even though things got reactive.

Though one of them decided this incident means they are “unfinished.”  Y'know, because there’s still anger and quirky self-protection left.

Excuse my messy human not-there self, but fuck that.

As if there’s somewhere to arrive to. As if we don’t contradict ourselves about what we should be, every two seconds. As if it’s even possible to get life all cleaned up according to some arbitrary supposed-to’s. As if it’s more enlightened to follow that set of rules. As if any of that is even a worthy goal.

This sounds just like every finger-wagging etiquette for well-behaved children since kindergarten.

Meanwhile existence is obviously more than ok with every bit of this dramatic excitement. I mean, I don’t see any yelling judgmental name-calling assholes on this planet being immediately terminated by lightning or other spiritual punishment, do you?

No, existence says, “Oooh! Food fight!” while we ridiculous humans sit with our hands folded, carefully trying to control and beat the fictitious personality into some bullshit false image of consciousness.

The idea that they should be left out is just spiritual propaganda.

Now yes of course these flawed humans are just an image, a façade. What else can we be? Are we going to spend our whole lives polishing a façade?

No matter how awake we think we are, sometimes the façade is a rude bitch.

Let it alone and let it breathe for god’s sake.

Because frankly, it is astonishingly freeing to be allowed to be our particular weird, idiosyncratic experience of existence, without fixing according to some woo-woo fantasy of “better.”

It is astonishingly freeing to be allowed to be imperfect (whatever that even means,) to be fucked up, to be shadow, to be kindness and variability and inconsistency and not prettiness and fury and love, if that's what's there.

This is the wild, colorful, cornucopia-like stuff of life.

It is already good.

So all those little rules to be better or more or different than what’s already here?

Ain’t no one got time for that.

Click here to see Judy on Buddha at the Gas Pump.   https://www.youtube.com/watch?v=MnxlpQC2PBU&t=6s


"The idea that enlightenment means sitting around with a beatific smile on our faces is just an illusion. Every emotion is available to us. To be awake doesn’t mean we have fewer emotions available to us. Emotion is just a way that existence functions through us."
--Adyashanti

"People want liberation, but they are also terrified of it. If they completely let go, they fear they’ll find a dangerous, deluded person underneath it all. The sense of Original Sin is alive and well in us. We think that there’s something fundamentally black about our nature, that something monstrous will emerge if we let go. We walk around all day in this virtual reality. If we see through it all, and give it up, what will become of us? It’s scary.
Everything in the end is a defense against nothingness."
--Adyashanti 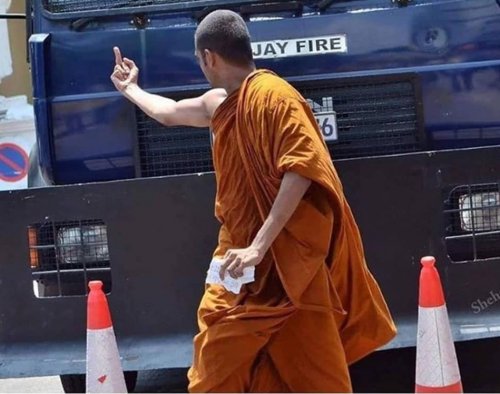