"No decision, no fear."
--Byron Katie

"The choices that will be made will be made, and you've no choice about that."
--Jeff Foster


Years ago during the height of the last recession, it suddenly came to me to sell the sun-drenched, window-filled, ocean-view condo I’d been living in in California for over 12 years.

I knew instantly it was the right thing to do.

I shared the idea with my then boyfriend/co-owner of that beautiful place, expecting his immediate, very reasonable ‘no.’  But somehow selling seemed right to him too.

We set to work. The place sold quickly, in a bidding war, even in the heart of recession.

There was nothing but calm.

And here I was, like a hamster, re-running over it all, again and again.

As if my now-panicked, now depressed review of the pros and cons mattered one whit.

As if the decision had not been already made.

Decisions that have also already been made and acted on.

Take a new job? (which has already been started.) Stay with the spouse? (while not moving out for years). Keep the sick dog going? (while doing 3x daily pillings and bi-weekly trips to the vet).

There are pro-cons lists and visions of an unsalvageably messed-up future and questions about competence and confidence and worth.

While the body and life live out the already-finished decisions.

Finished for now, anyway. Until the idea to do something else shows up.

Such an odd thing that only humans do.

I mean, my cat gets up and walks into another room. She doesn’t make the change and then think, “Hmmm, did I make a mistake coming in here?”

And how funny that we don’t notice that ideas come TO us.

Standing in the shower, or walking the dog, or drifting off to sleep, we are handed a gift, a surprise, an unasked-for idea.

We don’t have to earn it or be deserving. Pop! There it is, coming into our heads.

From “out of the blue.”  Falling into our laps. Quietly. From somewhere else.

Somewhere not driven or seen or known by us.

And then we say I made a decision. I did this.

Graspy humans taking ownership of something that happened to us.

And then we get busy rudely turning the gift over and over in our hands, evaluating its merits, as if it was our work and our doing and our idea and we are the arbiters of whether it’s good or bad.

Unsurprisingly, this theft of ownership of decisions feels awful.

Hello self-blame, regret, fault and desperation to psychically figure out what the future will bring.

And we do all these mental gymnastics despite the fact that the decision itself has already come with calm. It's the ownership and rethinking and psychic guessing that brings the anxiety and worry.

It seems things run smoother and sweeter without our frantic, useless, input.

But nevermind that. Let's climb on the wheel and keep redeciding.

So the next time there’s a decision needed, maybe we might try something different. Maybe we might ask, and wait, and listen, and

Trusting the calm feeling to be the guide, when the inevitable doubt starts spinning.

Without questioning, without reviewing, without cross-examining and grilling the idea to death.

Kind of like trusting The Force. Rather than the Jedi.

I mean, can you imagine a Jedi saying, “Gee I don’t know if The Force is right. I better figure this out myself.”

Humans are irrelevant to the process of “deciding”.

The Force does all the work.

It's going to do its thing regardless.

That would save humans a whole lot of terrified spinning.

Allowing access to the calm we wanted to attain in the first place by making the "right' decisions.

I mean, it's possible it would feel better to not second-guess The Force.

and a lot bigger worlds

"Since one can’t decide to think
Nor can one decide
Thoughts’ contents,
Why does one
Claim their ownership?
Is every sound wu'hsin’s because
He can hear them?"
--wu'hsin

“I worried a lot. Will the garden grow, will the rivers
flow in the right direction, and if not how shall
I correct it?
Was I right, was I wrong, will I be forgiven,
can I do better?
Will I ever be able to sing, even the sparrows
can do it and I am, well,
hopeless.
Am I going to get rheumatism,
lockjaw, dementia?
Finally I saw that worrying had come to nothing.
And gave it up. And took my old body
and went out into the morning,
and sang.”
--Mary Oliver (edited) 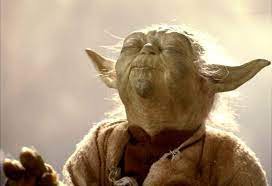