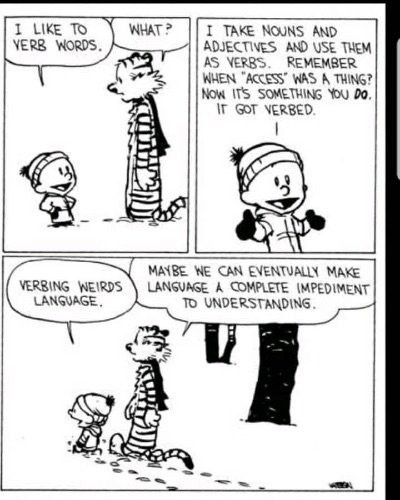 Categories: being self objects language illusion

"To know is to be.
Being nothing, I am all.
Everything is me."
--Nisargadatta

Don't go spouting out an answer, just be the answer. Be It."
--Adyashanti

"Verb: words that show an action (sing) or state of being (exist)"
--Merriam Webster


Here at Mind-Tickler headquarters we’ve talk a lot about no-self.

9 times since 2016 actually, discussing the self we’re not.* Much less often about what we are.

So today we'll try to balance that just a bit.

Here I am watching my cat clean herself in the window.

Cat, over there. Me, owner and seer of said cat, over here.

I'm definitely not the kitty; she's something other than me. After all, 4 sentences up I call her "my" cat, and one can’t be both owner and also the object owned.

That makes 2 things, me and cat.

And now I begin to notice I'm watching me watch kitty. I’m aware of me being aware of her.

Awareness (thing) looking back at me (thing) from outside (thing).

Wait, how many things is that now?

Naturally there are plenty more things too- such as consciousness, enlightenment, body, thought, mind, ego, personality, self, feeling.

Language has formed the world into nouns since before we were two, forcing us to think in terms of distinct and separate things.

The main building block of mind and understanding and thought is words. And words favor nouns.

So it is very difficult- almost impossible- to see the world any way other than in terms of self, others, and awareness as things.

“With what am I aware of my experience?” --Anonymous

Can you see that this question as worded makes finding an answer unlikely? “With what" makes awareness a thing. “My experience,” creates an owner, and also makes experience a thing owned.

This is partly why so many seekers never come to an actual lived understanding, settling instead for intellectual parroting.

Perhaps, if we really want to get this no-self business, or to see and think differently,

Or instead of trying to figure out if we’re awareness, or the thing that’s aware of awareness,

We could instead play with BEING.

Being experience rather than experiencing being.

Fluid. Uncentered. Changing one millisecond after the other.

Of course there’s no guidebook for doing this, no method, no rule. And it’s certainly not going to come naturally.

So this is entirely just for fun. None of it is serious or important.

We can notice though, that we’re either verbing or we’re not.

Because if we're verbing, then we're everything.

And everything makes for no exceptions.

No “outside of me” ownership. And no owner at all.

In fact, no thing at all.

And then it might be fun to see - what happens to the precious and feels-so-real self exactly, when it’s not a thing?

That seemingly strong sense of a Me might just dissipate, dissolving into the everything it is.

And of course there's absolutely no reason or need. Ever.

Because it involves no thing.

So there’s no thing to lose.

No thing to gain.

“Only words and conventions
can isolate us from the entirely
undefinable something
which is everything."
– Alan Watts

"Make me nothing and from nothing, make me everything."
--Rumi